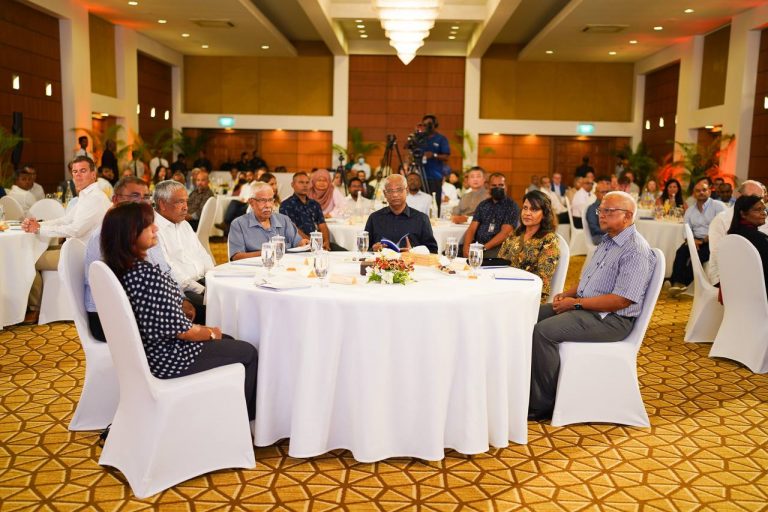 50 Years of Tourism Awards by MATI

The Maldives Association of Tourism Industry (MATI) held the “50 Years of Tourism Awards by MATI” ceremony this evening at Kurumba Maldives. This event is a highlight of the celebrations of the Golden Jubilee of Tourism in Maldives planned by MATI. The event intended to honour organisations and individuals that have exceptionally contributed to the Tourism Industry of Maldives over these past 50 years. The chief guest for this event was His Excellency President Ibrahim Mohamed Solih.

A total of 57 awards were given which included 4 awards given to the Pioneers of Maldives tourism and 2 awards given to previous presidents in recognition of their contribution to the tourism industry of Maldives. The winners were selected by a committee of industry experts and veterans that comprehensively vetted and evaluated all nominations received.

The Chairman of MATI, Mr. Mohamed Umar Maniku initiated the awards ceremony by delivering the welcome address, followed by remarks by His Excellency President Ibrahim Mohamed Solih. The closing remarks were given by the Vice Chairman of MATI, Mr. Hussain Afeef. The event concluded with a networking event and dinner.

In light of this year being the Golden Jubilee of Tourism, MATI has organised different activities which includes The Chevening / Maldives Association of Tourism Industry (MATI) Scholarships partnership, release of 2 coffee table books titled – “Maldivian Resort Architecture – 50 years of island resorts” authored by Mr. Mauroof Jameel and “50 years of Tourism in Maldives – the Pioneers, People and Policies that shaped the Industry” authored by Dr. Simad Saeed and a partnership with Parley Maldives tackling plastic pollution and promoting environmental conservation.